For homeowners in Western North Carolina, moisture is a big issue.  Our area gets a lot of rain and a lot of humidity, and that can lead to problems with water damage and mold.  So, what’s a homeowner to do?  It’s a tricky question, and one that’s often best left to the professionals – Asheville Real Estate News sat down with Diana Holmes of 1-800 Water Damage of WNC to find out more.

Holmes, who has been in business since 2010, is all too familiar with the havoc that water damage can wreak on a home.  In fact, it’s how she got started in the business – on Christmas day of 2009, her family’s basement flooded.  Holmes didn’t know what to do or who to call, so she did what most of us do – she Googled it.  Ultimately, she had a less-than-satisfactory experience and decided to start her own company and provide a better service to people who, like her, need help and don’t know where to start.

Ever since the business has been booming.  “We’ve had steady growth year after year,” Holmes says, attributing this in large part to the fact that 1-800 Water Damage of WNC prides itself on honesty and trustworthiness in an industry that can sometimes be less than ethical.  Holmes and her company set out to provide their customers with accurate information and solid advice, whether that means that the homeowner does business with them or addresses the problem on their own.

Of course, addressing the problem isn’t as easy as just cleaning up the water or scrubbing off some mold – first you have to identify the source of the problem, and that’s where professionals like Holmes come in.  “For us, whether it’s a mold remediation or a water damage situation, we figure out where the water’s coming from, where the moisture’s coming from,” says Holmes.  “You’ve got to fix the source first, and then you can go about remediating the underlying symptoms.”

While that source can sometimes be the excessive rain that our area is prone to, more often than not it comes from plumbing and appliance malfunctions.  In fact, Holmes estimates that 98% of the water damage her company sees comes from one of these two sources.  “Appliances have shelf lives; they aren’t built to last forever,” she says.  Two of the most common issues are rusty water heaters and leaky ice makers on fridges.  These can both be chronic issues resulting in deep underlying damage, as a small leak may not be noticed right away.

Mold is another major issue that 1-800 Water Damage of WNC sees a lot of, but it isn’t always a problem.  According to Holmes, almost every property has a certain amount of mold.  “Fungi growth,” as she refers to it, is present in a large number of crawl spaces and basements, and doesn’t necessarily have to be a deal breaker.  There are a few conditions that have to be met for mold to grow – a temperature between 68 and 86 degrees, an organic source of food, and moisture – and by taking away at least one of these things you can stifle the growth of mold in your home.

But what if you aren’t able to identify the source, or can’t resolve the issue once you’ve identified it?  That’s when you call in the pros.  But don’t call just anyone – make sure that the company you’re working with is reputable and knowledgeable.  Holmes provided three things that every homeowner should find out before working with any water damage or mold remediation company:

1.  Get an itemized estimate.  Where are they getting their number from?  Estimates should be detailed and include pictures.

2.  Find out if they’re certified, and what their training is.  This isn’t necessarily as simple as it sounds, though: “There is not any government, state, or federal license you’re required to have,” says Holmes.  “It is self-regulated.  There are only three states in the union that require a license, and that’s only required on mold remediation.”  So, if there’s no license to refer to, how do you know if a company is reputable?  “What you want to see is ‘are they certified?’ and ‘who are they certified by?’”  Holmes’ company is certified by the IICRC – the Institute of Inspection, Cleaning, and Restoration Certification.  “They are literally who writes the standards that the entire industry, as well as the insurance industry, follows.  Another reputable organization is called RIA – the Restoration Industry Association.”  According to Holmes, any contractor should be able to present you with their certification before you decide to work with them.

3.  Verify their insurance.  “Make sure, particularly in mold, it’s not just a general liability insurance policy that a contractor has.  They need to have what’s called Contractors Pollution Liability, or CPL for short.”

Another thing that Holmes stresses is the importance of asking questions.  “Any time you’re experiencing an issue or have questions, feel free to give us a call,” she says.  “Questions are always free.  We’ll come out and take a look at it and let you know if it’s something you can handle yourself, how to go about doing that, or if it’s something you really should have a professional do, we’ll be glad to let you know that as well.”  And, above all else, she says, “we just want everybody to be safe and healthy.”

To learn more about Asheville Real Estate News and to watch more episodes tune into the YouTube Channel, follow Asheville Cash Buyers on Instgram and Facebook. 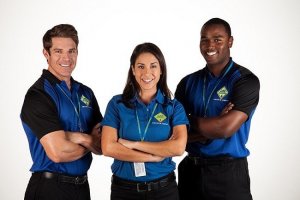 To learn more about water damage and mold remediation, or to find out about working with 1-800 Water Damage of WNC, visit them online at 1800waterdamage.com/north-carolina/wnc or give them a call at 828-398-4027!